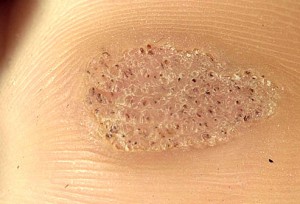 I think that, of all the pathologies that I discuss with students, plantar warts stimulate the most interesting of conversations.

Let’s start with myth #1 that you can get a wart from kissing a frog or a toad. Come on now, who goes around kissing frogs anyway? False.

Myth #2: Warts have seeds that spread themselves and roots whose tentacles reach wide beneath the surface of the skin. False again. The truth is, the virus that causes plantar warts can spread itself and by doing so “seed” the growth of more warts.

So, what is the truth about warts?

Common warts, verruca vulgaris, are caused by one of the 150 related varieties of the human papillomavirus (HPV), a pathogen that can infect the mucocutaneous membranes of the body.

The virus produces excessive growth of benign, hard, crusty protein particles by targeting the keratinocytes in the skin. Keratinocytes are the predominant cell in skin and form a barrier against invading pathogens. The virus makes its way into the body when cuts or scrapes are present to weaken the protective barrier created by the keratinocytes.

Warts do not typically create a strong immune system response. They therefore tend to grow for months or even years without much attention brought to them. Although slow, they are tenacious; removal methods must be thorough.

Warts look like hard, cauliflower-shaped calluses, so it’s important to be able to distinguish the difference between the two. They present often at joints – think fingers and knuckles – or on the sole of the foot, where they are known as plantar warts.  Plantar warts that grow together in a cluster are known as mosaic warts. 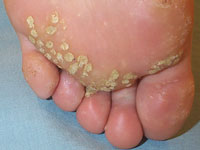 Standing and walking puts pressure on plantar warts and tends to force them deeper into the tissue, with the added pressure often resulting in pain to the affected area. Plantar warts in themselves are harmless, although in many cases they are too painful to ignore.

Differences Between Plantar Warts and Calluses

Although it can take months or even years, warts usually go away by themselves. Most people prefer to take some sort of action rather than wait for their natural decline.

Some folks treat warts themselves, while others consult with podiatrists or dermatologists. Treatment options are topical (application of salicylic acid or liquid nitrogen, essential oil application); some involve more invasive procedures (lasers, scalpel incisions, immunotherapies). Combative therapies are best provided by a trained and licensed practitioner, as “self-surgery”, even aggressive use of a pumice stone, can result in a secondary ring of warts surrounding the original annoyance.

Another strategy that seems to work is simply wrapping the wart in duct take. Yup! You read right. Follow the link at the bottom of this post to read a study that compared duct tape wrapping to cryotherapy.

Even more interesting are the seemingly crazy folk remedies that work. As bizarre as these may sound to you, people swear by the results they have gotten. Here are some that I have heard in my many years of teaching:

As far as I’m concerned, if it works, go for it! The above folk remedies cost literally nothing and are non-invasive. Since little money is spent on wart research, maybe these decade-old folk remedies serve to prove the psychoneuroimmunology connection between beliefs, thoughts and our physical bodies.

Because any skin that flakes off or any blood that seeps out from around a wart can potentially carry the virus, warts are often discussed as contagious skin conditions. Please keep in mind though, that this is a very slow-acting, almost lazy, pathogen, so a practitioner would have to work hard to “catch” someone else’s warts, starting with the existence of a cut or sore on the therapist’s hands.

Reflexologists should consider all warts a local contraindication when offering their work. Minimize direct contact with warts; do not apply pressure on the wart. If your client has undergone some invasive procedure on their wart where leakage of fluid is possible, insist that s/he bandage the area before expecting you to work.

Pay extra attention to the reflexes of the lymphatic system to support the body’s attempts to destroy the virus.

What remedies have you and/or your clients used to rid yourselves of warts? I suspect there are far more than what I’ve listed above, so do share!

Focht DR, Spicer C, Fairchok MP: The efficacy of duct tape vs. cryotherapy in the treatment of verruca vulgaris (the common wart) 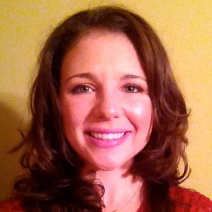 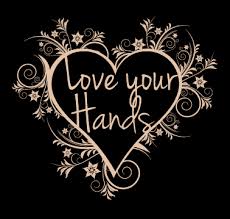 Taking care of your hands starts well before you’re in the clinic. It involves awareness of the other activities you engage in that stress your hands.

Do you pluck guitar strings? Grip gardening shears all weekend? Struggle to open large-mouthed jars? Work on a computer for hours on end? Couple these with your age and gender (muscle mass and strength decrease with age; women are more likely to suffer from musculoskeletal injuries than men)[i] and you’ve got more than enough reasons to apply the motto “Selfcare is healthcare” to your life.

#1 Take care of yourself.

What sort of tricks do you employ to take care of your hands?